Our week-long journey across the Northeast was not without its hiccups — Zack mixing up his days and nights and us dealing with middle-of-the-night shrieks from the baby who has always slept through the night; dealing with a HUMONGOUS-OMG-Blizzard that turned into just a few inches where we were driving; a lot of time in the car and somehow not enough time with all of our loved ones. 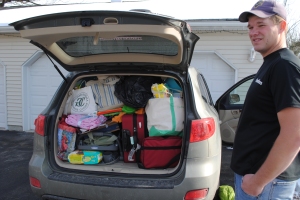 BUT. I wouldn’t trade it for the world. I don’t even remember how many times I just stopped in the middle of something and said to my heart or out loud or to the nearest person just how happy I was at that moment. How blissfully at peace with the world and life and the realization of how many beautiful things are in my world.

There’s so much to share and I’m already feeling like I’m forgetting some special moments, so I need to keep as many of these memories at my disposal as possible. I’m splitting our trip into NJ and Massachusetts because, although MA was sort of in the middle of our trip, we spent as many days there as we did in NJ.

So, let’s start at the very beginning (a very good place to start)…

I already mentioned the glitches. Well, they began before we even left the house. We left an entire day later than we intended, but it all worked out great in the end. Hours after we should have been on the road, Scott received a phone call from his late friend’s father. (Zack’s middle name is after this former college roommate of Scott’s, who passed away a few years ago from a car crash). After nearly 40 minutes on the phone, my husband was just glowing. I was so happy that things hadn’t worked out the way we had planned, because maybe we wouldn’t have gotten that beautiful memory for Scott.

We finally had us and the car totally packed up early Christmas Eve morning and made it to my Dad and Janet’s house by late morning. We spent most of the day hanging out and bracing ourselves for what we knew would be an absolutely insane two days bouncing from one place to another. It also gave Z-man time to hang out with his PopPop and Nana, who might have loved every milli-second of it.

We spent the evening at Janet’s sister’s house with her family and had a great time. (Especially Scott, who might have sampled a bit much of the bar along with my father. The two of them spent house “playing pool” while in reality they were just laughing at each other while standing in the middle of the Game Room. Silly men. Apparently they bonded.) 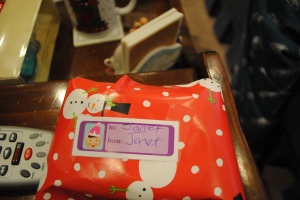 We had a fun gift exchange on Zack’s first Christmas morning. He was far too young to understand anything but my heart was glowing at all of the future Christmases we will hopefully share with him. Scott and I began planning a lot of traditions that we can’t wait to start — some of which we already started this year.

Then it was off to my grandmother’s house for Christmas dinner. About 30 people, yes 30!, were in attendance, and there was barely an inch of extra room once the three long tables and chairs were set up around the tiny dining room area. It was so nice to see all of the family I had grown up with and who helped me become the woman I am today. They are so special to me.

Then, my parents joined us for a run to my sister’s house. My niece is a Christmas Baby and so it was time for birthday cake for her. I can’t believe she’s 11 already! I was at the hospital the day she was born and it was one of my most exciting days. I love being an aunt now more than I could ever imagine. It’s a really special relationship.

Then we had to eat and run to go to another party — this one with my Mom’s family. What an incredible group of people. Cousins and more cousins, loved ones with huge hearts and the absolute warmest of embraces. We rang the doorbell and you could just hear half a dozen people screaming “BABY!” and running for the front door. Zac 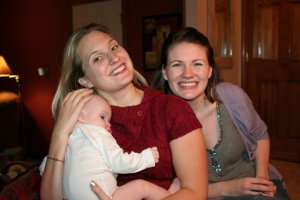 k was most definitely loved and soaked up every minute there, from falling asleep on Chochie Patti’s shoulder to snuggling with Cousin Tammy for such a long time. I really enjoyed my time talking one-on-one with Tammy, who was my soul sister growing up and is still so important to me now, despite being in different places in our lives.

We spent the night and next morning at my Godmother’s house. Aunt Alice and Uncle Paul are so good to and with Zack. He lights up when he’s with them, too. I only wish we had had more time to share with them, but the “blizzard” kept them from traveling with us to Massachusetts.

After our three-day stop in MA (four if you count the six-hour car ride it took in the snow to arrive!), we spent another very relaxing two days with my Dad and Janet, really spending the time as effortlessly as possible and having great meals and conversations together. 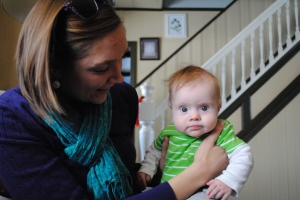 My friend Kacey, Zack’s “Aunt Boose” visited, too! She was teaching Zack really important things, like how to be cool and why good girls gotta get down with the gangstas… or something like that, I’m sure. She’s not allowed to tell him about his Momma in college until he’s at least 30, however.

The Jersey Girl was at her Then Home and happy and hated pulling out of that driveway last week to head to her Now Home. So many families, loved ones, friends, who made it unbelievably special. My favorite Christmas yet.

One thought on “The 2010 Christmas Adventure: Part One”