Scott and I had a “Zack Moment” tonight. I was holding The Dude while he sat on the counter in the kitchen as Daddy finished up dinner preparation for the adults. I kept leaning in to steal a smell of baby lotion and dried peas (haha it sounds worse than it really is) and I saw my partner in love and life staring at his son with such peace and love. 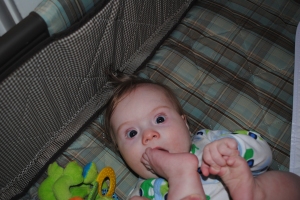 It’s moments like this that make it hard to believe Zack is seven months old. There are some days that it seems like a lifetime. Like we’ve been shoving peas into his mouth on pretty-colored spoons all our lives. Days where his hair, now lying down and landing in front of his eyes, make him look like a boy instead of a baby.

But then there are the days where it doesn’t seem like it’s even been seven weeks. Moments where I still feel frustrated or burnt out or helpless. Days where he is still very much the smallest of dudes who needs his Momma and Daddy so much — and more than he probably ever will again.

It’s an amazing place we’re in. The clock is always ticking and we just have to hop on the second hand and enjoy the ride, stealing moments wherever we can — even if it’s a seemingly-mundane instant in the kitchen on a Tuesday night.

Z-Man doesn’t have an exact weight or length (our next doctor’s appointment isn’t until May) but we’re guessing he’s in the mid 17-pound range. (Maybe more?)

His hair is, as I’ve hinted, getting really long and laying almost completely flat now. It’s coming in in a very, very light blond shade, so with his old brown tips, he looks like a two-toned Duders. We try to smoothe it to one side or the other (and sometimes I try to mold it back into the mohawk) but it always comes flying down — usually right back into his eyes. We still do get some crazy sticking-up-in-every-direction moments though.

Zack is beginning to fit pretty well into Size 9 Months clothes, although his legs are still on the short side and anything larger than 6 Months will fall right off of his butt at this point. We just started Size 3 diapers, too! Wooooo!

He sleeps through the night again now after a short glitch with that system last month. We put him to bed usually between 7:15 and 7:30 at night and the first chirps of baby babbles aren’t heard over the monitor until around 7 or so in the morning.

With the exception of today, we’ve started switching to one longer nap in the afternoon, which is great for everybody involved. Every now and then it’s still a 30-minute nap in the morning and an hour or so in the afternoon, but we much prefer the two or two-and-a-half hour naps. Mmm. 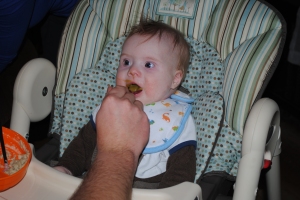 I mentioned the peas already, but that’s not where the fun ends. The Dude started baby foods this month and is in absolute love.

If he were ever to leave his Momma, it would probably be for food, not another girl.

Sometimes it’s a pretty messy process (carrots the other night ended up all over his face after he and Momma had an absolute gigglefest in mid-feeding) but most of the time, things stay pretty clean.

The one issue I do have with feedings this month, little fella? The mandatory poop during breakfast. I mean, seriously.

EVERY.SINGLE.DAY. Things are going along just swimmingly. Dude is eating spoonful after spoonful. Momma is humming along to some Sirius channel and chugging coffee like it’s nobody’s business. Then a spoonful comes back out. Then another one. Then there’s a squirm. Then the grunt.

And then comes the face.

Momma puts the spoon down, sits back, checks for “the face” and continues her coffee until the process is over.

Every morning. Every single morning.

Z-Man got a new sippy cup the other day — it’s sort of a trainer for a real sippy cup, really. When I handed it to him for the first time, he grabbed both handles and lifted it immediately to his mouth. Hooray, I thought. But now it’s sort of hit and miss.

Sometimes, I turn away for a second and suddenly hear him gulping the cup I had laid down next to him. Other times, I hold it to his mouth, put his hands on the handles and… it falls with a thud to the floor. On repeat. 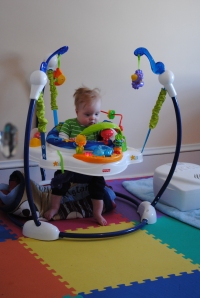 Dude tested out his bouncer/jumparoo for the first time this month. At first, he was very, very skeptical of the whole thing — all that bouncing and music playing and feet on the floor stuff.

However it’s slowly but surely becoming a little cooler each day. 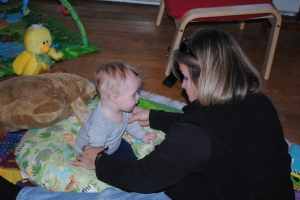 Our physical therapist Kathleen is impressed with his progress and has given us some hopeful thoughts lately, but I have to admit, I’m ready, ready READY for all of our hard work (especially Zack’s) to pay off in the day that he sits up all on his own, smiling at his new accomplishment. We worked this hard with getting him to tolerate Tummy Time and I remember reaching the point where I thought the battle would never end. And it was right about then that he made oh-so-proud and so wonderfully happy.

So I tell myself to remain patient. The luck of the game for us is that we really stare each milestone right in the face like a bad staring contest that no one wins. We treasure the accomplishments so much, but it takes some frustrating moments to get there.

For now, I dream.

And I cherish every single moment. The sitting up, the lying down, the staring up at his Momma, the cooing to his Daddy, the quick grab of animal fur with a giggle. I love these moments.

Here’s to another great month. (Seriously, they somehow each keep getting better!)