‘Cause God gave me you for the ups and downs

God gave me you for the days of doubt.

I’ve known Scott for more than five years and we fell in love immediately. A blind date, a semi-long distance relationship, contradicting work hours and different lifestyles and backgrounds, but we worked hard, we fell hard. Moving in together and road trips and day trips and photos and games. Cats and dogs and a baby, too.

All the while, we laughed. A lot. I’m always laughing with Scott. For our anniversary, we had two days, just us (OK, and a cute baby) and all I freakin’ did was laugh. Over and over. Belly laughs and giggly giggles. 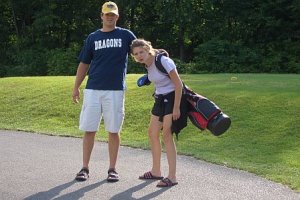 Two years ago, I promised Scott and he promised me to love no matter what — through ups and downs, through trials, through happy times, in sickness and in health. Our vows didn’t mention all the hardships we’ve faced as a team in great detail, but I’m still not surprised at the strength of our partnership.

My wedding day was one of the happiest days of my life, and one of the most special. I had so much fun, I felt so loved, and of course there was laughter. 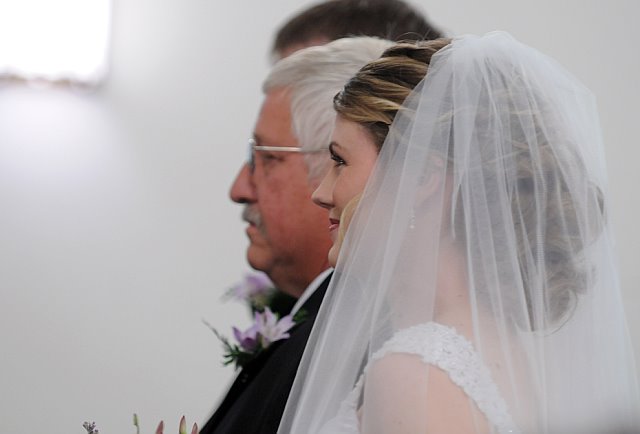 My wedding day was indeed a beautiful day, despite a torrential downpour, a unity candle that wouldn’t light and forgetting our marriage license. Ooooh, and did I mention our AMAZING honeymoon? Le sigh.

But some of my favorite moments in my life come from early-morning kisses, watching Scott as a father, being silly and staying up late, and sharing tears and worries and fears and doubts.

You want cheesy lines? I got ’em.

He is my everything.

He is my best friend. 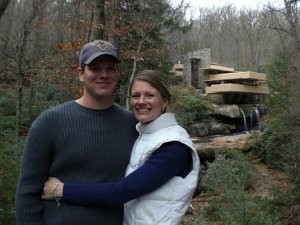 I have two modes: strong and weak. There is no in between and both are contrived entirely out of my own beliefs in how I should act or think or how I’m expected to handle a situation that comes my way. So when I let down my guard or show my emotions, I am weak, plain and simple, in my mind. I know that’s not the case and I know it’s only human to not be 100 percent strong 100 percent of the time. But pre-Mommy Mode and post-Mommy Mode is like night and day.

So the other day at work I quite literally saw my future walk on by, right in front of my unsuspecting self. I was standing outside the resort when for some reason, I felt inclined to turn around in the other direction. At that exact moment, I saw 10 seconds of a mother’s day-to-day life. The mother of a son with Down Syndrome. Her son was tall, thin, smiling a large smile, but clearly impacted greatly in several ways by Down Syndrome. He was hesitant about the stairs in front of him, confused about where he was heading and staring excitedly and innocently at the world around him, noticing the flowers in neat rows, the cars being parked nearby, the people standing on the porch. And his mother, graying hair, tall herself, reeked of patience and a heart that is still not whole. She guided him, one hand on his arm, talking to him even though he was much more focused on the task at hand. She looked at him, seeing 20-plus years of moments like this and 20 or so more to come, the two of them never to be equals, she always being his leader.

My throat hurt, my eyes filled with tears.

And as quickly as I started feeling bad for myself, I felt horribly unfair to Zack.

In the next month, we face two consultations with doctors. The first one, on Tuesday, is a yearly exam with Zack’s pediatric cardiologist. At birth, Z-Man had two holes in his heart that were (hopefully) going to close by his first birthday. At his last pediatrician appointment, though, the doctor thought he heard a murmur. Children with Down Syndrome are often impacted by serious heart defects.

Then in mid-October, we go to Children’s Hospital in Pittsburgh for a consultation with the pediatric urologist. Zack will likely be facing a surgery in the next year — killing two birds with one stone as we try to help his non-descended testicles (keeping them up can increase his risk of sterility and testicular cancer) and a hernia near his belly button.

When Zack was five days old, we left the hospital for the first time, heavy with a new diagnosis and exhausted from an extremely long hospital stay and traveled to the cardiologist’s office, where our nine-pound baby was attached to wires and coated with ultrasound goo as a strange new doctor with a heavy accent looked around his tiny heart. I cried so hard trying to breastfeed him in a private room afterwards, wiping the blue goo all over the doctor’s chair that it was the biggest failure of a feeding we had. I thought I had actually been feeling my heart break in two and I knew that this would be no ordinary parenthood.

I knew that life would never be the same.

But it’s still shocking when it stares you in the face. When a lanky boy with a beautiful smile has no idea how much his mother loves him, how much she would do for him. How much she has sacrificed, studied, learned, prayed.

Zack is getting a one-year evaluation from Early Intervention and we have already been warned by our therapists that we may not like the results and that we, a collection of his caregivers, may have failed him, becoming too comfortable with how we were doing things to encourage more and more independence, strength… success.

So, we endure crying while we force him to feed himself puffs and melts and pieces of cereal, we urge him to hold his sippy cup despite the fight he gives us and we fight right back, pulling him up to stand and letting him roam and crawl and explore. Because I’ll be damned if I ever let myself fail him. If I’ll ever let anyone fail him, give up on him or stop him from having every.single.opportunity humanly possible. I will never look back in regret; I will never wonder if we all did enough for him. 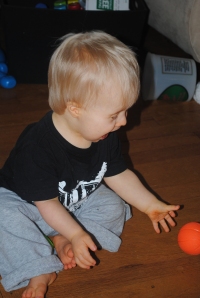 Because he’s a fighter.

And when I forget that, I have an amazing support system. E-mails and texts that tell me they “get it,” upbeat quotes that always come at just the right time, compassionate words from c0-workers. And friends like Owen’s Mommy who spent the better part of an awesome playdate listening to me sharing my worries and babbling about exercises and yadda yadda, this and that… all the while, she’s instictively helping Zack to stand, rolling a ball back and forth to him and making him grab things on his own, all the while making me feel like the luckiest friend in the world.

I love how Zack and Owen have this amazing bond together. How they sometimes babble in their secret language to each other, sharing toys now, touching arms and pants and feet with smiles. I hope they are always friends and I’m grateful at the comfort knowing Owen will have such a wonderful Mommy who will teach him in just the right way all about his BFF.

It’s funny how life works out, what happens when you’re not looking or thinking or planning. It’s funny how even at the worst of times, there is still that deep-down feeling that you still have it pretty good and things will all work out just fine.

You can consider this the post where I try to apologize for not sharing any thoughts or baby stories or more of this and that in a few weeks and try to make it up by posting an absurd amount of photos. If a photo is worth a thousand words, this blog post must be worth at least a million.

So let’s make up and be friends, OK? I’ve got lots of stories I want to share — just need a couple of quiet days to catch up from a hectic September.

And now, without further ado, a crazy amount of photos from our awesome, beautiful, blessed lives. 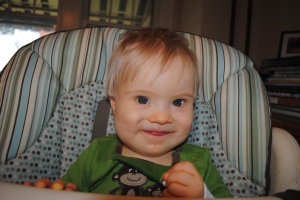 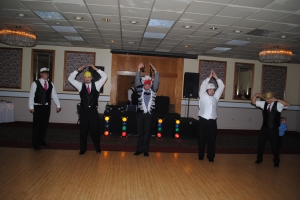 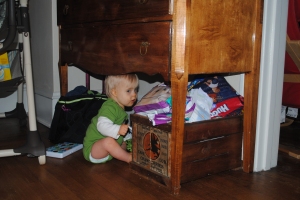 Be back soon with some words, pinkie promise!

I still can’t look at the New York City skyline the same way. After all those years of weekend trips to visit family just a few minutes away and counting the landmarks — the curvy-top bridge, the exit sign, the Statue of Liberty, the twin towers — it will never be the same.

I was starting my senior year of high school in Northern New Jersey — just a quick hop on a train away from Manhattan. I was in Math class. I hated Math class. Hushed whispers between teachers, something is up. And then being sequestered in the brick building, with little to no information. Rumors started about the in-town business park — the International Trade Zone — mixing with bits of the truth, finally revealed in a schoolwide announcement and  a day of disbelief and fright. I saw teachers leave their cup of steaming coffee on the desk as they went to frantically find the fate of their husbands and sons. I saw a classmate just about collapse in worry about a parent who worked in one of the towers. Friends in nearby towns wrote AIM messages about being able to see the smoke from their bedroom windows. Within a week, large flags — most of which are still there — were draped from bridges over the nearby interstate that leads to NYC.

And by twists of fate, I wound up living one county away from the final resting place of Flight 93 — something that had almost been overlooked by me just years before. I covered two somber ceremonies at that site, meeting with the families and friends of the 40 heroes on that plane 10 years ago. And it’s back in my face again this year, an entire career change and the memories of Flight 93 and 9/11 are literally knocking at my door, with our hotel only 30 minutes away from the new memorial in Somerset County.

I don’t know how I’ll ever explain this to Zack; how he’ll possibly ever know the magnitude of that day.

I’ve graduated high school, changed colleges, graduated college, worked in two careers, moved to Pennsylvania, got married, had a baby and learned more than I ever wanted to know about Down Syndrome. And yet, this time of the year, I always feel like my entire life has stood still and I’m still 17, watching my world collapse, watching familiar skylines change overnight.

It just means we’re human and we’re living in a world that’s crazy and confusing and sometimes doesn’t make sense. But that’s OK. It makes us who we are. As a girl, as a New Jersey resident, as an American.